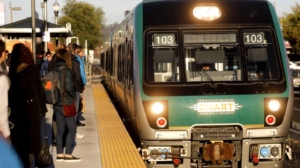 NEW YORK, NY (May 6, 2022) – Vector Media today announced the addition of the Sonoma-Marin Area Rail Transit (SMART) system to their portfolio of out-of-home advertising assets, solidifying and further expanding upon their suite of transit assets across the country. The new light rail inventory in Sonoma-Marin County adds to Vector’s existing presence in the San Francisco DMA where their iconic Double Decker buses are complemented by transit advertising partnerships in Contra Costa County in the East Bay area, and now the North Bay area, California’s famous wine region, and up to Santa Rosa, CA.

The addition of SMART to Vector Media’s portfolio will allow the company to bring their clients a high-end outdoor advertising product frequented by the affluent, diverse, and active communities of Sonoma-Marin County and San Francisco. SMART connects the cities and towns of Sonoma-Marin County beginning at Sonoma Airport down to the San Francisco Bay at Larkspur, with 12 stops along 45 miles of track. The stations include: 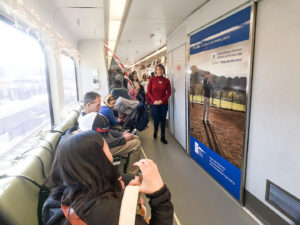 Advertising aboard the SMART train cars includes interior posters, concession train advertising, and all new experiential opportunities, while station posters, station dominations extend the audience reach beyond the trains to the platforms at all 12 stations.
In the coming months all new signature train car vehicle wraps will bring brands greater opportunities to reach audiences in downtowns, and those traveling California U.S. Route 101.

“SMART operates one of the most modern rail systems in the country, providing access to the Sonoma-Marin area and all that it offers Californians and visitors alike,” said Marc Borzykowski, CEO of Vector Media. “We’ve always prided ourselves on our ability to understand local markets and be true collaborators with our transit partners, and this partnership with SMART will be no exception. We hope to provide a seamless transition for existing advertisers and introduce new ones to this exceptional opportunity and the innovations we hope to bring.”

About Vector Media
Founded in 1998, Vector Media (www.vectormedia.com) is one of the nations’ largest private outdoor media companies, specializing in large and small format public and private media opportunities as well as the creation of interactive brand experiences.  The company’s current inventory is spread out over 55 US markets including each of the top 10 US DMAs and 28 of the top 50 US DMAs and includes over 30,000 advertising faces, comprised of municipal transit, transit shelters, billboards, wallscapes, airport shuttles, and the only coast-to-coast double-decker advertising network in North America. Vector’s rapidly growing experiential division integrates the company’s Out-of-Home assets and other capabilities through the creation of dynamic brand experiences.

A Picture is Worth a Thousand…Impressions!